Lord God the most highest heavenly FATHER please touch the hearts of my friends.

THE CROSS OF CALVARY

THE CROSS OF CALVARY

This morning (27.1.2010) as I sat before the Lord for my quiet time, I sang hymn No.164
from Redemption Hymnal – He was nailed to the cross for me –
Some of you may know it but I shall write the words here to bless us all –

What a wonderful, wonderful Savior, Who would die on the cross for me!
Freely shedding His precious life blood, That the sinner might be made free.

Chorus: He was nailed to the cross for ME (twice)
On the…

BENEFITS OF BEING RIGHTEOUS

BENEFITS OF BEING RIGHTEOUS

"Surely he will never be shaken; a righteous man will be remembered forever. He will have no fear of bad news; his heart is steadfast, trusting in the Lord" (Psalm 112:6-7 NIV).

More and more people are becoming religious especially in this part of the world. However, it is becoming more difficult to find righteous people who really fear God in his day-to-day activities. In spite of this fact,  the writer of Psalm 112…

Watch Out for the Spirit of Deception!

Ladies, it is time to WAKE UP! Don't be so desperate for a husband that you overlook the warning signs God is showing you!!! Follow the warning from the Spirit of discernment! Discern, discern, discern! The spirit of deception is on the loose looking to deceive silly women who are seeking a husband!! Seek first the kingdom of God and His righteous and then everything else will be added. The Bible says a man who finds a wife finds a good thing, not a wife. Don't be in a hurry! That spirit…

Any soul who cares for the world and it's riches more than replenishing his heart with the Word, will choke off the Word of God in his life and actually become unfruitful in all his ways(Matt. 13:22).A sad state of a man is when I am sharing the power of God's Word with him and the whole time, he has a look in his eyes like he didn't hear a word I was saying. Immediately after this Holy Spirit moment, he brings up something completely worldly. Hmm - dry bones.

But now we have been delivered from the law

“But now we have been delivered from the law, having died to what we were held by, so that we should serve in the newness of the Spirit and not in the oldness of the letter.”-- Romans 7:6. This passage lets us know that we have freedom from spiritual liabilities and penalties of God’s Law but not freedom to do what God’s law forbids. There are many things that Christians can do that we choose not to do because of our own prejudices, prideful thinking, and ignorance. As redeemed souls of Christ,… Continue

Many Christians say that leading a holy, repentant life is not necessary for salvation and others say that a person only has to believe. By this they mean that if someone just believes, just knows, that Jesus died for their sins then they are saved and that is that. In this article, I would like to look at what it means to believe and what Jesus meant when He said, “unless you repent, you too will all perish” (Luke 13:3).

Training Witnesses for Christ
all over the World

My ministry is committed to share the message of Christ with all people. Through actual street witnessing, training of churches, and web based training, i hope that someone who would have never known Christ will find Him as their Savior. People in 90 nations and 48 states in America have been trained with the Street University. Everyday there are witnesses all over the world using the simple techniques contained within our…

REMAINING CONNECTED IN A CORDLESS WORLD

"REMAINING CONNECTED IN A CORDLESS WORLD"

For from within, out of the heart of men, proceed evil thoughts

“For from within, out of the heart of men, proceed evil thoughts, adulteries, fornications, murders, thefts, covetousness, wickedness, deceit, lewdness, an evil eye, blasphemy, pride, foolishness. All these evil things come from within and defile a man.”--Mark 7:21-23. In this passage, Jesus gives us a list of things as coming from the heart and making us unclean. He begins with evil designs. Every outward act of sin is preceded by an inward act of choice therefore; He begins with the evil… Continue 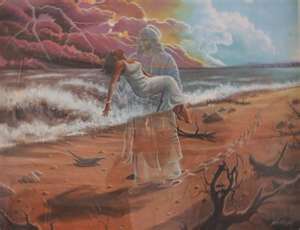 Here is your Wednesday's Words to Live By for the upcoming week:

THE POWER OF THE BLOOD OF CHRIST

Heb. 10: 29; Heb. 13: 20) Scripture has declared - WITHOUT THE SHEDDING OF BLOOD THERE IS NO REMISSION (Heb. 9: 22) Jesus Christ is the Passover Lamb that was slain for all sinners. The holy communion was instituted by Jesus Christ, God’s Son. He wanted believers to do this in remembrance of His sacrifice for us. (Matt.26: 17- 30 and 1 Corinthians 10: 16; 1 Corinthians 11: 23-34) Those of us who partake in communion need to know why we do this and the sacredness of doing…

IF YOU ONLY KNEW

IF YOU ONLY KNEW

John 4:7-19 There cometh a woman of Samaria to draw water: Jesus saith unto her, Give me to drink. 8 (For his disciples were gone away unto the city to buy meat.) 9 Then saith the woman of Samaria unto him, How is it that thou, being a Jew, askest drink of me, which am a woman of Samaria? for the Jews have no dealings with the Samaritans. 10 Jesus answered and said unto her, If thou…

“He answered and said to them, “Well did Isaiah prophesy of you hypocrites, as it is written: ‘This people honors Me with their lips, But their heart is far from Me.”--Mk 7:6. Christ quoted Is 29:13 & this prophecy was a perfect fit for the actions of the spiritual phonies of that day; the Pharisees & Scribes. These religious leaders were angered by Jesus who rejected the ceremonies men added to the law that God had made. They followed the traditions of men because such teachings… Continue

Are Christians Sending The Wrong Message?

I am waiting for some prominent Christian or Christian organization to set the record straight during this election season. I believe Christians have been sending the wrong message to the American people and their elected officials. The wrong message is, “We need more social conservative Christians in office and rid our nation of liberals and those who oppose Christian values and capitalism!” The message should be, “As Christians, our source is not Washington D.C. it is Jesus Christ! The first… Continue

"An overseer, then, must be above reproach, the husband of one wife, temperate, prudent, respectable, hospitable, able to teach"--1 Timothy 3:2. These are all wonderful attributes to have and they each deserve our attention however, today I want to focus our attention on the word temperate which means having power or control over all his passions. We apply the term now with reference to abstinence from intoxicating liquors. In the Scriptures, it includes not only that, but much much more. It… Continue

Prosperity not Poverty is Destroying America!

15 I know your deeds, that you are neither cold nor hot. I wish you were either one or the other! 16 So, because you are lukewarm—neither hot nor cold—I am about to spit you out of my mouth. 17 You say, ‘I am rich; I have acquired wealth and do not need a thing.’ But you do not realize that you are wretched, pitiful, poor, blind and naked. 18 I counsel you to buy from me gold refined in the fire, so you can become rich; and white clothes to wear, so you can cover your shameful nakedness; and…

WHAT DO YOU SEE?

Dearly Beloved,
It is exactly nine years today that I have been ministering to people throughout the world through the Internet. An email ministry that started on February 18, 2003 has metamorphosed to an Internet ministry with almost ten aspects. Since most of you are not among the 47 people that received my first message and one of the best messages, as a way of celebrating the ministry every year, let me resend the first message to you:
WHAT DO YOU SEE?
“We saw the Nephilim… Continue

FIGHT THE FIGHT OF FAITH

FIGHT THE FIGHT OF FAITH

A few nights ago I was in my sleep waging a war on the devil with the Word of God as my sword and realized how important it is to know God is IN us!

Jesus told us that the thief (devil) comes to steal,…