And he goeth up into a mountain, and calleth unto him whom he would: and they came unto him. And he ordained twelve, that they should be with him, and that he might send them forth to preach (Mk 3:13-14)

" May the God who gives endurance and encouragement give you a spirit of unity among yourselves as you follow Christ Jesus , so that with one heart and mouth you may glorify the God and Father of our Lord Jesus Christ . " -Romans 15: 5-6

"'For I know the plans I have for you,' declares the LORD, 'plans to prosper you and not to harm you, plans to give you hope and a future. Then you will call upon me and come and pray to me, and I will listen to you'" (Jeremiah 29:11-12 NIV).

I have read this Bible passage times without numbers. I have heard people quoting it. I have even used it to preach to or encourage other people several times. However, when I…

JESUS LOVES ME & YOU !
http://www.youtube.com/watch?v=0DYDvyBKZJA

I would like to thank God for His grace upon our lives, and Apostle Peter said; "but grow in the grace and knowledge of our Lord and Savior Jesus Christ. To Him be the glory, both now and to the day of eternity. Amen." At this end-time, it's very clear to some, not all, the spiritual growth has gone down and down, there is circling as it was with Moses in the Wilderness.I have been teaching through the book of Revelation, and when I came to chapter 22:10 "And he said to me, "Do not seal up…

Ye have not chosen me, but i have chosen you, and ordained you, that you should go and bring forth fruit, and that your fruit should remain: that whatsoever ye shall ask of the Father in my name, he may give it to you.
John 15: 16

It is better to be divided by truth than united in error.

It is better to speak the truth that hurts and heals, than falsehood, that comforts and then kills.

Let me tell you something, friend, it is not love and it is not friendship, if we do not declare the whole counsel of God.

It is impossible to…

O Lord, I have heard a good word inviting me to look away to You and be satisfied. My heart longs to respond, but sin has clouded my vision until I see You but dimly. Be pleased to cleanse me in Your own precious blood and make me inwardly pure, so that I may with unveiled eyes gaze upon You all the days of my earthly pilgrimage. Then shall I be prepared to behold You in full splendor in the day when You shall appear to be glorified in your saints and admired in all them that believe. In…

A Reason to pray.

I have noticed that in today’s world of strife and confusion many Christians have lost the ability, reason, or the desire to pray.

“Yet have thou respect unto the prayer of thy servant, and to his supplication, O LORD my God, to hearken unto the cry and to the prayer, which thy servant prayeth before thee to day:”
A supplication is an earnest prayer, a prayer that is not intended to advance a person financially or with power in this life but for the cause of righteousness within…

Is It Wrong to Be Proud?

So now the LORD God proclaims:
Consider the fate of those who tower high!
When it allowed its branches to reach up among the clouds,
it became arrogant. (CEB)

Early in my years as a pastor, I was leading a Bible study for several college…

How the Mighty Fall

Through your shrewd trading you multiplied your riches. But then you became proud of your riches.

About a decade ago, Jim Collins published one of the most influential business books in recent memory, Good to Great: Why Some Companies Make the Leap...and Others Don’t. Then,…

Where Do You Turn When You Don't Trust God Enough?

The house of Israel will never again bring guilt on itself by faithlessly turning to Egypt for help, for they will know that I am the LORD God. (CEB)

Perhaps you really can't answer the question I asked in the title of this reflection: Where do you turn when you don't trust God enough? Perhaps…

Spoke in time past to the fathers

"God, who at various times and in various ways spoke in time past to the fathers by the prophets, 2 has in these last days spoken to us by His Son, whom He has appointed heir of all things, through whom also He made the worlds"--Hebrews 1:1-2. We must go beyond the mere idea of God that is so often held & get to the person of God beyond the creed & theory. We must have reality, instead of going through life trying to love an ideal & be loyal to a creed. Then I think a new world…
Continue

Every age has its own characteristics. Right now we're in an age of religious complexity. The simplicity which is in Christ is rarely found among us. In its stead are programs, methods, organizations & a world of nervous activity activities which occupy time/attention but can never satisfy the longing of the heart. ... all testify that we, in this day, know God only imperfectly & the peace of God scarcely at all. If we would find God amid all the religious externals, we must first…
Continue

I am converting to Amish! 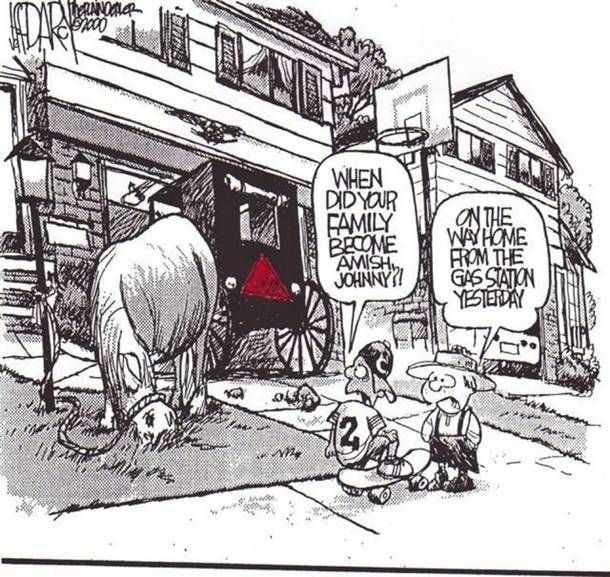 "As the hart panteth after the water brooks, so panteth my soul after thee O God"--Psalm 42:1. Seeking truth/seeking God are one/the same thing since God is truth. Jesus, the God-Man put it this way: “I am the way, the truth, and the life. No one comes to the Father except through Me."--John 14:6. Within the fold of conservative Christianity there are to be found increasing number of persons whose religious lives are marked by a growing hunger after God Himself. They are eager for…
Continue

The vine is dried up, and the fig tree languisheth; the pomegranate tree, the palm tree also, and the apple tree, even all the trees of the field, are withered : because joy is withered away from the sons of man.
Gird your self and lament, ye priest : howl ye ministers fo the altar : come, lie all night in sack cloth, ye ministers of my God : for the meat offering and the drink offering is withholden from the home of your God.
Sanctify ye a fast , call a solemn assembly,…

This video shows the remarkable technology transfer that is taking place in Africa as thousands of people are introduced to solar cooking technology, which allows them to cook food and boil water using Africa's most abundant and free source of energy--the sun. I hope you will share this and other videos on my solarwindmama channel with your family and friends.…