JESUS WAS NOT A PACIFIST 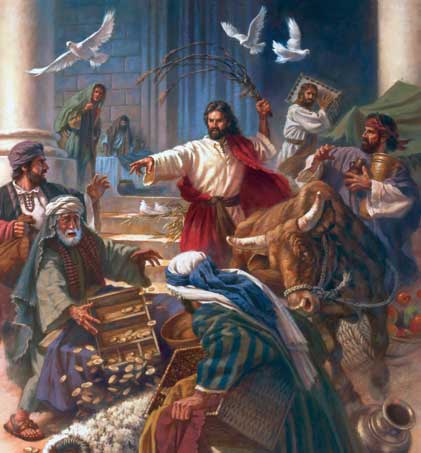 JESUS WAS NOT A PACIFIST

Passive Christians are the equivalent of lukewarm Christians.

Passive Christians sit back and say things like, "well, we just have to pray about it" or, "you know, God is in control, so it doesn't matter what we do, if it's in His will it is going to happen anyway" or, "well, we are to just preach the Gospel, and let God take care of the rest", and one of my personal favorites, "You know, we have to love people like Jesus loved people, we can’t be offensive, so we'll just have to pray for them". To which I say, all of these statements are correct in their proper contexts and depending on the situation at hand. We certainly must love people like Jesus loved people; and He loved them enough to be brutally honest with them!

That's why I do not believe that God has called Christians to be passive; on the contrary, there is overwhelming evidence that God calls us to be just the opposite; fearless and courageous, action-taking, radical, warrior-like, dogmatic, and a host of other descriptions that would characterize the true child of God!

Imagine if Moses would have said, "well guys, we're just going to pray about this and believe that God will make a way". God did, but there was some action required on Moses', and the children of Israel's part. For example, God said, "when I see the blood, I will pass over you". He did not say, "I am going to go get the lamb and slay it for you and put the blood on the doorpost for you." They had to do that!

Or what if Joshua had told Israel that "we are going to just pray and believe that the walls of Jericho are going to come down, and wait for it to happen." Jericho might still be standing! No, they had to get out and march for 6 days around the city, then 7 times on the 7th day. But, that's not all. God told them that on the 7th time around they were to blow the trumpets and "shout with a great shout", then the walls "fell down flat"!
Jesus was anything but, passive! Not only Hollywood, but even worse, the modern day church has soft-peddled an emasculated, soft-spoken, effeminate Jesus. However, a close examination of the Scripture reveals that Christ was anything, but that! Oh, he was gentle at times, but please don't ever mistake "meekness" for "weakness". But, I digress.

TIME FOR THOSE PRAYER-LEGS TO START WALKING!

The point I want to get back to and focus on is the fact that, yes, we absolutely should pray and need to pray. However, there is an old cliche' that says, "you have to put legs under your prayers." It's not Scripture, but there is a lot of truth to the saying, and probably a number of verses of Scripture that probably support that idea.

As Christians we are at a place in this country now where we must get past this passive praying, and start being militant about our prayer life.
Where at all possible, we have to pray then engage the culture.

Yes, we pray against the horror of abortion and the atrocities of Planned Parenthood; but then, we have to get engaged from calling, writing, emailing or visiting our legislators to protesting, peacefully and prayerfully, at the abortuaries.

Yes, we pray that God will convict those involved in the homosexual agenda; but then again, we call, write, email and visit our legislators and attend or hold rallies speaking out against the Supreme Court ruling on sodomy-based marriage.

Yes, we pray that God will once again be welcomed back into our public school system and that students and faculty alike, have their freedom to exercise their Constitutional First Amendment right to freedom of religion and speech once again recognized without fear of reprisal! Yes, pray about it, but then pick up your phone, your pen and paper, go to your computer, or better yet, if possible, go to your state capital and get an audience with your legislators and work on getting this thing done!

Yes pray, but do not remain silent once you've said, "Amen". Get to work! Form or join groups and organizations and peacefully, but forcefully, fight for what is right!

Prayer - real prayer - genuine prayer - has never been and never will be passive. Again, our most powerful example is Jesus.

The reason most real prayer meetings have the least attendance is because of several reasons, but just to name a few:

2. We have our priorities out of whack.

There are probably several more reasons, but these are among the first that come to mind.

• Christ did not shed His blood and die for us, then come back from the grave on the third day because He was passive!

• A passive Christ doesn't go into a temple with a whip and turn over tables and chairs and wreck the place when He sees the desecration that is taking place in His Father's House! (John 2:13-17)

• A passive Christ doesn't deliver a message and eight times in the message, call the religious rulers and leaders hypocrites at least 8 times, then call them a bunch of snakes, then asks them they are! (Matthew 23:13-33)

We need for God's people to get out of the pews and tap into the power and anointing of the Holy Spirit and get involved, active, passionate, fired up and engage the culture! That's what prayer warriors do! God has called us to be salt and light. And He hasn't done so based upon the contingency of our comfort zone and convenience!

Let's do more than be passive prayers; let's be Prayer Warriors! Our nation, the world and ultimately the Kingdom of God needs you - NOW!